skip to main | skip to sidebar

I think most designers have the problem of creating a logo / identity for themselves. I think it one of the hardest thing to design like most designers I am very self critical of what I produce. So here are some questions I asked myself:


What does it say it about me?

Does it look good?

Will take me seriously?

These kind of questions are easy to answer when you are designing a logo / identity for a client. I have thought about these questions for years and never really got around to answering them. I have had many ideas, which include designing a coat of arms with monkeys it was a bit tongue in cheek and looking at it didn’t really work for me. Mainly I thought that people would really take me seriously. After the monkey thing I decided to go down a more retro look using a William Morris inspired leaf design which now I think doesn’t really work either.


But now I think I have found something that is simple, visually clever and usable for a logo, I had the idea way back in college (I recently found my sketchbook with initial ideas) at the time I didn’t rate the idea too much. 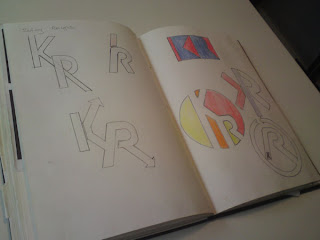 I decided to go back to the idea after going to a D&AD President Lecture that involved Experimental Jetset. After seeing the project for Réunion des Musées Nationaux, I thought my idea could work and be quite successful with a little work. 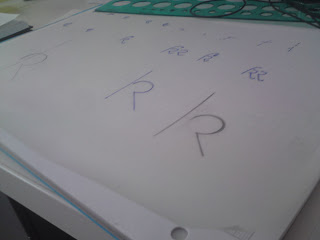 So logo on its way, onto the website, letterhead, business cards... etc… might come back to that in another 3 years…


Posted by Keir Richardson at 07:16 No comments:

What’s that coming over the hill? IT’S RAVENSBOURNE!!!!!

As I mentioned in my last post I will be attending Ravensboure in the coming weeks, so I thought I would bring your attention to the fact the University is moving next summer to from their current location in Kent to a nice new shiny building, next to the 02, at the Greenwich Peninsula.

Along with the move, the Uni has also decided to have a nice new shiny identity which will be designed and implemented by Johnson Banks.

From what I have seen of the new building (CGI, fly through and the prospectus) it is a huge step forward for the university and I am very excited to see the results of the Johnson Banks’ work.

I believe it is exciting times for the university, the students that will be studying there and me …
Posted by Keir Richardson at 02:54 No comments:

The Sound of Wow

Hello… erm… and … welcome (I suppose) to my blog, A Sharp Intake of Breath. Of those who don’t know me, I am soon to be attending Ravensbourne Design & Communication College after 4 years of working in the design industry. The main reason for going back into education is the fact I was made redundant earlier this year. It is incredible hard to find a job, so I ended up working in a supermarket, which was a huge step away from what I wanted to do. I felt that the industry has moved some much in the past 4 years, I realised that employers are looking for more versatile designers.

So I have decided to study a course which will help me to become a more versatile designer. The course I will be taking is BA (Hons)Design (interactions), which sounds lovely, but I don’t really know much about it. I am hugely excited to be starting a new chapter in my career.

So the purpose of this blog is to be a journal of sorts to inform people (whoever is interested) of what I am up to and my development in the next few years. I will also writing about design that influence and that interests me. Hopefully I can inform the masses of new and exciting happenings in the design world…
Posted by Keir Richardson at 12:02 No comments:

Keir Richardson
London, United Kingdom
Studying Interaction Design at Ravensbourne after 4 yrs as graphic designer (sometimes freelance as a graphic designer) and i try to blog every now and again...