skip to main | skip to sidebar

Welcome to The Machine

For the final project at uni we had to produce a machine that is started by human touch, then every action had to start another action. We had to have a physical element and a digital element as well.

The project was more about prototyping from the initial working models to the final object.

I decided to make my machine pretty big, it was a meter and half by a meter. It had 5 different actions, I would start the machine by ringing a mobile with a golf ball balance on the top of it. The ball would then run down some pipe to a box that was connected to a piece of wood that was holding up a hammer. When the ball goes into the box the string would pull the piece of away from the hammer and would cause a vibration on the shelf.

Another piece of wood falls from the shelf due to the vibrations with that a piece of acrylic, that is attached to the wood, falls from a pipe to release a ball that would run down the behind my laptop and start an animation that was of a ball falling into cups and would run off the other side of the screen that would release another ball that would fall onto an iPod to play a random song.

There would be a video of this process but due to unforeseen circumstances (and not having time to test the machine as a whole) but I do have images of the final machine. I decided to keep it the look of the machine very miminal with just a hint of colour from the 3 pieces of wood used. Also the boxes were made from acrylic to give a clean look. 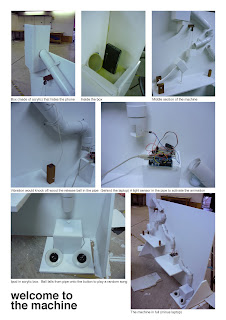 Posted by Keir Richardson at 13:11

Keir Richardson
London, United Kingdom
Studying Interaction Design at Ravensbourne after 4 yrs as graphic designer (sometimes freelance as a graphic designer) and i try to blog every now and again...